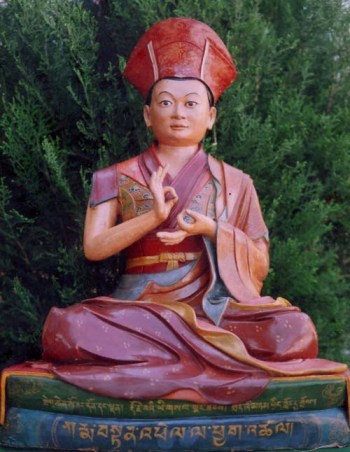 Khamtrul actually means the reincarnation from Kham, since the First Khamtrul Rinpoche, Ngawang Tenphel (1569-1627) came from Kham. It today covers the Kham and Amdo regions in Tibet. This is how the Khamtrul lineage started.

Khamtrul Rinpoche is renowned as the authentic emanation of Guru Padmasambhawa and as an emanation of Ling Gesar, the epical king of Ling whose legends have been the source of joy and inspirations to spiritual practitioners and of moral code of honor and courage for lay people.

According to his gurus' prophecies, Khampa Ngawang Tenphel went to Kham region of Tibet and strongly established the lineage of Drukpa in that region and had many enlightened disciples. In his lifetime, he set up retreat centers, educational institutes, monasteries and nunneries in Kham. Later there were almost two hundred branches of Khampagar Monastery in Kham region.

Khamtrul Ngawang Tenphel had many followers but his three main disciples were: Zigar Sonam Gyamtso, the First Zigar Rinpoche; Trulshik Trinley Gyatso, the first in the line of Adeu Rinpoche, and Drukpa Choegyal Gyatso (b.1578), the First Drugu Choegyal Rinpoche. These three Dharma brothers were known as the three oceans and are now in their eighth reincarnations.