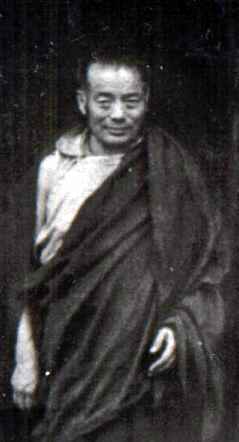 Khyungpo Gyaltön Rinpoche Karma Orgyen Jikmé Chökyi Senge (Wyl. rgyal ston rin po che karma o rgyan 'jigs med chos kyi seng ge) aka Lama Saltong Shagom (Wyl. bla ma gsal stong shva sgom) (1908-1970) was an accomplished Kagyü master who was sent to the Palace Monastery in Sikkim by the Karmapa and performed many of the practices for Jamyang Khyentse Chökyi Lodrö when he was ill and after he passed away in 1959.

He was born in 1908 in Khyungpo in Kham, East Tibet and was recognized as the tulku of Saltong Shogom, an incarnation of one of Gampopa's three main disciples known as 'the three men of Kham'. He was also known as an emanation of Manjushrimitra, Nupchen Sangye Yeshe and Tsöndrü Senge. He studied with Situ Rinpoche at Palpung Monastery in Tibet, and then with Jamyang Khyentse Chökyi Lodrö, becoming one of his foremost disciples. He completed more than 100 million mantras of Amitabha and accomplished the practice of many other deities in retreat. He prostrated all the way from Kham to the Jokhang in Lhasa and then from Lhasa to Tshurphu.

He lived upstairs in the Palace Monastery in Sikkim, and was a teacher of Sogyal Rinpoche, Dzongsar Khyentse Rinpoche, Ringu Tulku and others. Towards the end of his life, following illness brought on by the hardships of a life spent in almost continuous retreat, often with very little food, he went on a pilgrimage to the sacred sites of Nepal (December 1969 - February 1970), giving away what little he owned as offerings before the ancient shrines he visited. He passed away on March 22nd 1970, remaining in the posture of Vajradhara for more than 48 hours, before his body was embalmed. In accordance with his wishes, expressed to the King of Sikkim, his body was cremated in the sacred site of Tashiding and his relics entombed in a stupa near that of his master, Jamyang Khyentse Chökyi Lodrö.