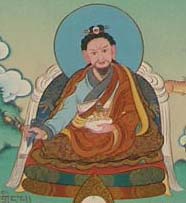 Changchub Lingpa, Langpopa Palgyi Gyalstan 14th c. Changchub Lingpa was born in the upper region of Ngari. From the view of the Northen Treasures, he was an incarnation of Namkhai Nyingpo or of Gyalwa Chowang, two of Padmasambhava's close disciples. From the view of the Kagyu sect, he was the rebirth of Rechungpa's close disciple who had written that great master's biography. Relying on a treasure guide once owned by Tseten Gyalstan, he began to reveal earth treasures such as ritual objects and holy substances. Finding both a prophecy and instructions to erect a large statue in the treasures he used the substances for that purpose. Many of the texts which he revealed still continue. Later incarnations would head Changchub Ling monastery in central Tibet and head the line of Northern Treasure practice which originated with Rigdzen Godem's consort.