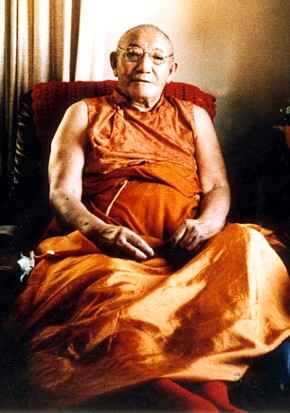 In 1906, the Fire Horse Year, H. E. Dezhung Rinpoche was born in the mountainous Ga region of East Tibet into a family famous for its skilled physicians. When he was only five years old, Rinpoche appealed to his parents to be sent to a monastery so that he could devote his life to the Buddhist path. Impressed by his request, Dezhung Rinpoche's parents realized that this was no ordinary person, but one destined to a very special religious role. He then went to study and live with his uncle, Ngawang Nyima, a monk who spent most of his life in retreat at the Thaglung Monastery in Ga. Dezhung Rinpoche began to learn letters and memorization and did chores for his uncle.

As a boy Dezhung Rinpoche read the biography of Milarepa in whom his uncle had strong faith, and he was so inspired by the life of this great saint, Dezhung Rinpoche himself wished to become a yogi. Instead, his future responsibilities bounded him to a more traditional approach to the Dharma. Much later in life, Dezhung Rinpoche expressed his continued devotion to Milarepa with a pilgrimage to all places of importance in that saint's life.

Dezhung Rinpoche's early education included instructions in spelling, etymology, versification, and rhetoric, Mahayana and Vajrayana treatises, and in particular on the Madhyamika or Middle Way. Among his lamas at this time were the Gelugpa lama, Lozang Chokyi Gawa, and a Nyimgmapa lama, Shenga Chokyi Nangwa.

When Dezhung Rinpoche was eighteen, he was recognized by the officials of the Dezhung Monastery to be the third rebirth of Dezhung Lungrig Nyima, and was accorded the appropriate wealth, position, and quarters in the monastery. He remained in residence at the Thaglung Monastery, however, rather than interrupt the precious teachings he was receiving from Legpa Rinpoche. Lama Legpa grounded Dezhung Rinpoche in the traditional method of listening to the Dharma, contemplating the teachings, and then practicing them, and he directed Dezhung Rinpoche to meet as many great lamas as possible.

Following the guidance of his lama, Dezhung Rinpoche received extensive teachings and empowerments from over forty additional lamas, including the renowned Rime master, Jamyang Chokyi Lodro. These teachings included the major texts of Tibetan Buddhism. For example, Dezhung Rinpoche received the Sakya Lamdre Tsogshe and Lamdre Lobshey four times and became a recognized master of these teachings. He was given the transmissions contained in the Druptap Kundu, a fourteen volume collection of meditational texts on a thousand deities, and as a part of his devotional tantric practices, Dezhung Rinpoche completed over ten years of retreats.

At the time of Legpa Rinpoche's passing, he appointed Dezhung Rinpoche to succeed him as Abbot of Tharlam Monastery. However, soon after, Dezhung Rinpoche and one hundred of his monks were forced to flee the approaching armies of Communist Chinese, and only forty monks survived the lengthy and dangerous escape to India.

Dezhung Rinpoche accompanied H.H. Jigdal Dagchen Sakya to the U.S. in 1960 to participate in a University of Washington research project on Tibetan culture and religion. During his twenty years in this country, he gave countless teachings and empowerments at centers across the U.S. and Canada and founded Sakya centers in New York City, Minneapolis, and Boston. Members of Sakya Monastery in Seattle have been most fortunate to receive extensive teachings from Dezhung Rinpoche and to be inspired by his great compassion. Dezhung Rinpoche spent most of 1981 in Katmandu, Nepal supervising the building of the new Tharlam Monastery and teaching the numerous Tibetan and Western students.

In the ensuing years between the founding of Tharlam Monastery and his passing in 1987, Dezhung Rinpoche traveled between the US and Nepal giving teachings and raising funds for the new monastery. All who were fortunate enough to be able to see him were affected by his great knowledge and compassion.

Dezhung Rinpoche's reincarnation, Sonam Wangdu, was born in Seattle, Washington on November 12, 1991. He was formally enthroned at Tharlam Monastery on March 8, 1994. His tonsure ceremony was performed by H. H. Sakya Trizin on April 6th of that year. At the same time he was given his formal name, Ngawang Kunga Tegchen Chokyi Nyima, by H. H. Jigdal Dagchen Sakya. He now resides and studies at Tharlam Monastery.